Dear women who felt like I did on November 9,

If comedy is tragedy plus time, 2016 felt like the year time collapsed and those two tropes became indistinguishable.

Just after midnight on November 9, unaware of the alarming turn in the polls, a dear friend of mine arrived at my house with a birthday cake glowing with candles. In spite of mounting bad reports, friends sang “Happy Birthday” to me. They all knew the earnest wish I had as I blew out the silly candles. Unbeknownst to my friend, they were trick candles and wouldn’t blow out, which meant I couldn’t complete my wish. The goofy, ridiculous sound of my increasingly desperate puffs, mixed with laughter and screams, hung in the room. Hilarious. Everyone laughed, because humor is like that. It shows up at the darkest of times.

The party disbanded slowly over the next few hours, but some friends stayed, anchored by a desperate optimism or need for community. As the banner travelled across the screen bearing the information that not only had Hillary Clinton lost the election, but so much worse, that this guy would be the next President, one of my girlfriends burst into tears. My other friend, the cake-bearer, dropped to all fours and yelled, “No…. He’s a rapist.”  I made a sound that alarmed my boyfriend and sent the cats running. It was deep, guttural, ugly, and filled with pain and disbelief. That’s what we women did.

We were all wearing silly pantsuits. Hilarious.

I don’t know if any men made the sounds I or we made on November 9.

Here’s another ‘funny’ fact: I’m a two-time rape survivor (not to brag), a comedian (who does a stand-up show skewering rape culture) and my birthday is November 9! Fucking hilarious! The jokes practically write themselves!

My point isn’t the ludicrous notion that the election ‘ruined’ my birthday. The point is I couldn’t help but see the absurd, surreal, awful fucking humor of it all.

The Set-up: a “rape-survivor-feminist-comedian-rape-culture-satirist” was digesting the information that a "lying-straight-rich-white-orange-moronic-racist-sexual-predator-Ivy-League-clown” beat the “first-female-feminist-most-qualified-candidate-ever” to become “The Most Privileged Powerful Man In the World” on my birthday!

Donald Trump is supposed to be the punch-line, not the president.

Suffice it to say, my birthday wasn’t that fun. I couldn’t really move and I couldn’t stop crying. I had a show coming up. Without trying, I thought of a joke: “You sort of hope to get fucked on your birthday because it's your special day, but everyone got fucked on my birthday.” Get it?

Then I did something really random — I looked up a Moroccan hammam. If you’ve never been to one, it is a traditional treatment where you sit naked in a hot, steamy room with other women for ages, which prepares your skin for when another lady comes in and scrubs you to within an inch of your life.

Or until you feel, as I must have hoped, that no one part of your body is sexualized unless you’re making it so. That you are in control of who, and what touches your body, and how. That you can shed skins and be ready for anything. I warned the woman working on me that I might cry, which made us both laugh. This curious intimacy with a female stranger felt like the polar opposite of the moment after the election results. It felt like proof that there are safe spaces. Proof that nakedness, physicality, vulnerability and gender have different ways and places of behaving, and that the stakes that accompany those things aren’t always so fucking high. And that laughter and release can be found in the oddest of places.

I did a show a few nights later. I had a lot of new material. Hilarious. “The Oval Office — the most powerful office in the world — is shaped like a vagina, but we still can’t get one in there or keep a total dick out of it.” Hilarious. I told the one I thought of on the day after the election, and it was funnier in that context. I did what I could to create the loudest, deepest laughs, threw truths and discomfort in to the room, and hoped I had saved the audience with the laughter they deserved for thinking about all this and for leaving the house.

The character I do to pull off this show, Asking For It, is very ‘likeable.' That has shifted. I’m still funny because that’s my job, but I don’t feel the need to be ‘likeable’ on stage anymore, because I’m a woman and I’m fucking furious.

I don’t usually publicize my own history of assault because I don’t want it assumed that’s the only reason I have license to do the show I do. I wanted to tell you here because on November 9, every woman who ever doubted herself for not speaking up about or reporting her rape, and those who did but never saw their attackers convicted or sentenced appropriately — all of us just got the most terrifying reminder we could imagine. We just watched ‘that guy’ be catapulted, not just to graduation, or winning a swim meet, or getting to make another movie or touchdown, but to the most powerful position in the world.

We are devastated and we are furious. And I am going to stay furious, noticeably furious and difficult and loud until this is over. We can bring up how awful he is in every single room we enter if we want to. We can rant about it on social media. We can point to him if we have to tell a Trump-voting loved one that they’ll have to accept our love from afar for a while until they do some serious thinking. We can laugh in his face.

I’ve tried to pick how much time in each day I can do the activist work we need to do, and I’ve been performing for free at fundraisers that feel important and immediate. When I feel really overwhelmed, I go out. I get away from the computer and get in rooms with people who remind me of how many of us there are, and how powerful we are when we take up space and make ourselves heard. Besides all the work, that is what makes me feel ok enough right now.

Some of the laughter in the room the first night I performed after the election sounded almost like the sound that came out of me as the final election results came in. Like these sounds were not-so-distant relatives. Like maybe sometimes the sound of releasing pain sounds like an unruly, trapped dragon in the middle of the night, and sometimes it sounds exactly like a room filled with laughter. I’m not saying comedy is going to save us from this clown, but I am saying this: Try to stay strong. Get out in the world and surround yourself with the people who make sense to you and make you laugh. Laugh loud and as often as you can because the election of Donald Trump is the worst joke ever made.

I'm with you, I see you and I believe you. 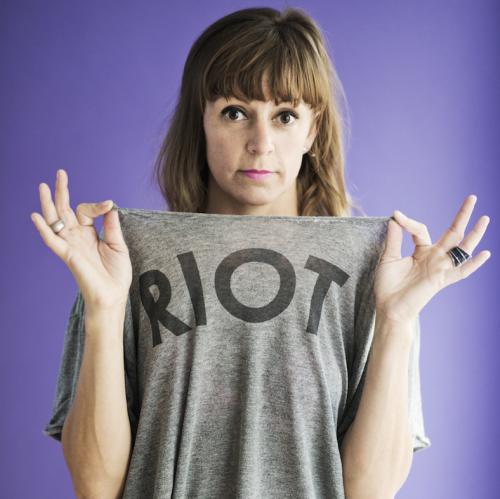 Adrienne Truscott’s work straddles many genres. Her critically-acclaimed award-winning Adrienne Truscott's Asking For It: A One-Lady Rape About Comedy Starring Her Pussy and Little Else! is considered a critical impetus to the evolving conversation about rape culture. She’s a 2014 Doris Duke Impact Award Artist, 2017 Australian Artist Ambassador, performed at the Sydney Opera House’s Festival of Dangerous Ideas and debuted on The Moth. Her writing appears in Women of Letters :Between Us, Doing It: Women Tell the Truth about Great Sex and The Guardian. She wears many hats and is attracted to the possibility of failure as a mandate for rigor.