In the years ahead, you will be coming of age and acquiring lessons that will likely serve to scaffold your views on life. Along the way, you might have encounters with people who think you have no right to be in the United States, the country of your birth. These are the times. We, your elders, tell you our stories to fortify you for those moments. It is the foundation on which you must build your house.

Your house is the sum of the people south of the U.S. border, in the Southwest United States, and in the long-time communities established in the midwest and northwest of this country. We, the people from whom you descend, have been working, inventing, producing, and moving since the age of the Toltecs, from those who first cultivated corn to those presently toiling in the agricultural fields for minimum wage, from growing cotton and producing textiles to working in Trump’s factories in Mexico. You come from gente who labor diligently and with dignity. The women who came before you had calluses on their hands but never on their hearts. You come from a long line of teachers.

When I was pregnant with your daddy, I told a friend over the phone. I was jubilant about the news of carrying my first child (who would be my only child). It was nearly overwhelming, the idea of being a mother, the grace of having a human being to nurture and bring up in a society where I had found so much lacking. Prospective motherhood implied my hope for progress.

“What is wrong with you?” the woman whose name was Lupe asked, her disapproval catching me by surprise. “How could anyone in their right mind bring a child into this world?” She was a theater actress in New York and in her seventies. From Mexico, arriving decades earlier, Lupe had been through a lot, including numerous failed marriages. She was living in a five-story walk-up in the Lower East Side with a pack of small dogs and maybe also cats. Roaches ran rampant over the spread of peed-on newspapers across the floor. The stench rose and burned your nostrils. Lupe was alone in a world alienating to mestizas. A mestiza is cognizant of her indigenous heritage but she knows in her veins also runs the blood of European colonizers. She may well have also had the blood of African cargo to the Americas sold as slaves and Chinese ancestors who braved oceans, built railroads, and endured the drudgery of field work, kitchens, and servitude. Of mostly indigenous heritage, Lupe remembered the days when Mexicans weren’t served in certain places weren’t rented to or hired for better employment.

The president of the country was Ronald Reagan. Reagan, Mariana, was a former Hollywood actor who had changed careers and been a Republican governor. He stood for the wealthy of the land, but there were those who were not wealthy — at the time and since then — also believed in him. During Reagan’s time the rich got richer and many of us struggled harder to make ends meet. Your daddy was just a child then. At one point I had four part-time jobs just to stay afloat.

Although we lived in the States, Reagan’s policies south of the border caused people like Lupe and me great consternation. We were Latinas and had family in Mexico, and the loyalties to our heritage ran deep. There were, for example, the Contras in Nicaragua. The Contras were rebel soldiers that Reagan’s government supported and who were aimed at getting rid of the elected government. The new government of Nicaragua had gotten rid of a wealthy family who had ran everything for a long time; the Somozas hadn’t cared about the people of Nicaragua. The new government, known as Sandinistas, claimed that it did. The plan was to have the people benefit from the country. Reagan cared only about the rich and was determined to get rid of the Sandinistas. This was done by persecution of people who expressed their support to the Sandinista government.

This caused countless of Nicaraguan citizens to escape to the north. They were in fear for their lives. Similar U.S. interventions in Central and South American had made many other people flee north, too. Some of us, like Lupe and I, knew about military backing, torture facilities, and the breaking of union organizing. We knew about the weaponry and the training of armies that the United States provided to the south. We lived in the north, were born there or settled there, paid taxes, climbed stairs to cold-water flats, were also kept out of unions and civil service jobs, were looked upon as foreigners — and out of personal or political connections to countries like Guatemala, El Salvador, Chile, Mexico, and Argentina, our hearts and minds dwelled in the south and in compassion and solidarity.

I had so much wanted to experience motherhood and yet, Lupe’s reaction gave me serious pause. Was I selfish to bring a human being into a world rife with all the social maladies I had witnessed — and some I had experienced firsthand? The advances made by the Civil Rights Movement of the late sixties and the subsequent grassroots activism of the seventies, which I had participated in, were being pulled back or downright dismantled. Our victories were being banished from the record, much like the countless of people that disappeared in those decades throughout Central and South America under regimes now famously known to have been supported by the United States. The disruptions in Latin America at the time resulted in a new wave of Latin immigration. That was how your maternal grandparents arrived as young adults in Chicago from Chile in the seventies.

In the eighties, during Reagan’s time, your mami and daddy were both born in Chicago. Two decades later they met at a hip-hop show in an Irish pub. In fact, we all, including you, were born in Chicago, second, third, and even fourth generations in this country. Yet, like me, you, a small girl as I write this, are asked what country you come from by people who still register whites as the only Americans who have legitimate roots in the United States.

More than a generation ago, we left the times of Reagan and the aggressive tactics aimed at suppressing any kind of socialist reform south of the border. Today, I write this because we are entering a new era, similar in some ways to Reagan’s and his focus on the interests of the rich. A newly elected president and administration have brought contempt for laws made in the interest of citizens enduring economic challenges. There is no shimmying around intolerance for migration and immigration from the south, whether documented or not. Since the election, children, like you, are being taunted by other children and told to leave. Women on the street are being attacked by Trump’s followers for being women. Intolerance of difference has been sanctioned, it seems.

Maybe in retaliation for ages if intolerance in these lands dominated by white society, we cling to the soft vowel sounds of Spanish generation after generation. Our dual-language skills in a country that has arrogantly endorsed monolingual laws may come off as un-American. Our customs and foods remain part of the traditions we uphold religiously. As for the matters of God, historically we were Catholic, settled by Spaniards, versus Anglo Protestants.

The villages and cities of our ancestors are remembered nostalgically across kitchen tables.

As for me, Mariana, I am a woman who has used writing to tell not just my own story but the multilayered stories of entire communities within and outside of the Latino/a experience in the United States. From Texas to New Mexico to Chicago and throughout the Midwest and the growing Mexican communities on the East Coast, our presence has been part of the fabric of this country.

Like your elders, you, too, will be a teacher. You may not be a teacher in a classroom, but by remembering and passing on our stories you will help our people to stay strong. We have been  on these lands for at least a thousand years. My great-grandmothers, grandmothers, and mother taught me our histories. Do not let anyone persuade you that the core of you does not contain fine molecules of soil, water, and air that have been recycled throughout the eons. Do not let anything cause you to doubt it. Take up space, be present, speak up, and, above all, remember our stories. They belong to you. 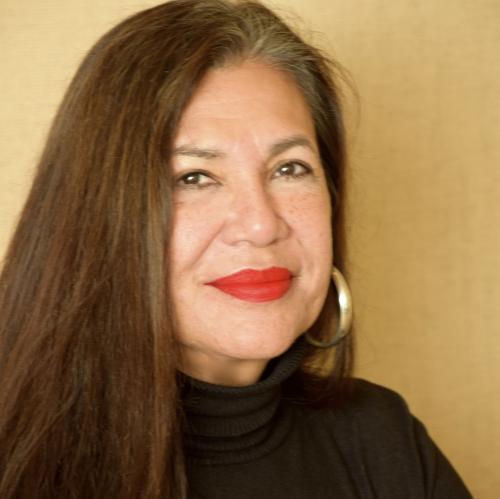 Bio - Ana Castillo (June 15, 1953-) is a celebrated and distinguished poet, novelist, short story writer, essayist, editor, playwright, translator and independent scholar. Castillo was born and raised in Chicago. She has contributed to periodicals and on-line venues (Salon and Oxygen) and national magazines, including More and the Sunday New York Times. Castillo’s writings have been the subject of numerous scholarly investigations and publications. Among her award winning, best selling titles: novels include So Far From God, The Guardians and Peel My Love like an Onion, among other poetry: I Ask the Impossible. Her novel, Sapogonia was a New York Times Notable Book of the Year. She has been profiled and interviewed on National Public Radio and the History Channel and was a radio-essayist with NPR in Chicago. Ana Castillo is editor of La Tolteca, an arts and literary ‘zine dedicated to the advancement of a world without borders and censorship and on the advisory board of the new American Writers Museum in D.C.

Error | Letters to the Revolution