Dear everyone (of every gender, skin tone, bodily arrangement, assignment given or achieved in the Universe known or unknown in perpetuity now and in the hereafter),

This has been a tough one. The bullies of the opposition would like us to think that we are not allowed to complain or protest or demand our rights after this longer-than-ever-before election cycle. They say that they won and we should accept it and move on. But we know that this wasn’t just any normal election. This election was an assault on what is being called “too much political correctness” or what they used to call civil rights.

The night of the election, I was living my dream. I had been asked to be on the jury of an international film festival in Geneva. The festival was right next to a burlesque festival that I was headlining in one of my favorite places, Prague in the Czech Republic. I was traveling, deliberating which fabulous foreign film would win the big prize, and feeling very fancy indeed. Not bad for a girl from Cowtown, NJ.

All alone with a bunch of French-speaking intellectuals in Geneva, I felt removed and so American on the night of the election. The morning after, I woke up with a start at 6:30 in the morning to a very desperate e-mail from my partner, Jeremy. The tone of just the subject line told me what had happened in the States. We talked and cried together and tried to offer each other some comfort. The worst for me that morning was facing breakfast in a foreign country. My French is just good enough to bumble through some light exchanges, but I lack enough nuance to explain myself, let alone an entire nation electing a reality star, a braggadocio, as representative of our country. All I could do was weep all day and then feel like a big drama queen. Even worse were the jokes and facetious pats on the head from the holier-than-thou French, a people inspired by our revolution and strongly devoted to their democracy, a people that generally prefers less outgoing politicians. One man, during a very violent film that in the festival, walked out after about 20 minutes, shouting, “This is the era of Trump!” I was a sitting duck perched in my jury row, blond and buxom and about as American as one could look. I had no defenses.

For a long time after my return to the States, I couldn’t watch the news or even read the paper. Seeing the man who once made profits on New Yorkers’ misfortune in the eighties, a man who had no plan yet was preaching hatred that let bullies feel better about themselves, made me so deeply sad. Every appointment to the cabinet of one of his buddies or of a Republican who had blocked anything that President Obama wanted to accomplish felt like a jab of a sword that hurt but didn’t kill. Seeing those bullies win after eight years of economic recovery and the amazing strides in social issues that we have made thrusts very deep indeed. Look at us, though — we’re still here. We are not going anywhere. As the news cycles and we try to wrap our minds around how we will get through this, we need to be there for one another.

We will stand together and help one another. Even though this feels like the start of an unforgiving, narcissistic era, the truth is that we, the little people, have power. Those younger than I don’t remember how restrictive and full of propaganda the Bush administration was. Living through those eight repressive years, not to mention the recession in their aftermath, was not easy. In order to feel like we had a voice, we made art and we listened to one another. The performance community flourished in this time. After all, there wasn’t social media as we know it now. People needed something real and in person. Mostly, we all needed a good laugh and to be together. This is how the neo-burlesque and variety world was born. Some of the most creative times in my life were during that period. This is the world that helped me to become a stronger person.

At that time, I noticed how people of all backgrounds came together and joined the fight. Eventually, even people who believed in conservative fiscal policies but held liberal social values joined us in that fight. I hold onto this, too. I know that even during times of regression there can be hope for progress. Now I’m buckling down and ready to be motivated. I wait for inspiration. I will be ready to stand with my brothers and sisters and defend our civil rights. And, like always, I am working on myself and trying my best to see the beauty in everyday things.

Hold each other close, and be fabulous. No one can take your fabulous from you. Get in there, fight like you do every day of your lives. The world is with you.

All of my love and strength, 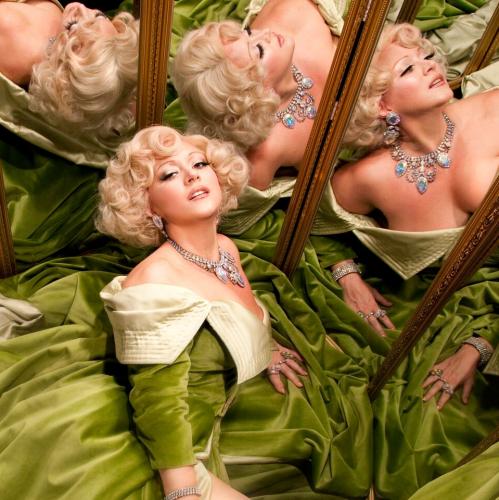 Miss Dirty Martini The “definition of burlesque”, Miss Dirty Martini, is one of the most celebrated personalities in the world of the new burlesque. She has been photographed by Karl Lagerfeld, Starred in the film On Tour -winner Best Director at Cannes 2010 – co-stars in Dita VonTeese’s touring show Strip Strip Hooray and voted number one burlesque performer in the world by her fans for four consecutive years! Miss Martini has spearheaded the new burlesque revolution in New York City and all over the world with her over the top physique and classical dance training bringing vintage glamour into the 21st century. A favorite of the original burlesque performers of the 1940's and 50's, Miss Martini has become an underground celebrity and a well travelled headliner nationally and all over the world"