(I address the powers that be; I look at the ceiling)

1. To the Masterminds of Paranoid Nationalism

I say, we say:
‘We,’ the Other people
We, the migrants, exiles, nomads & wetbacks
in permanent process of voluntary deportation
We, the transient orphans of dying nation-states
la otra America; l’autre Europe
We, the citizens of the outer limits and crevasses
of ‘Western civilization’
We, who have no government;
no flag or national anthem
the undoqueermented of Homoland Insecurity
We, the New Barbarians
in constant flux,
from Patagonia to Alaska,
from Juarez to Ramalla,
todos somos mojados
We, the seventh generation, the fourth world, the third country
We millions abound,
defying your fraudulent polls & statistics
We continue to talk back & make art

2. To those up there who make dangerous decisions for mankind

I say, we say:
We, the homeless, faceless vatos aquellos
in the great American metropolis
little Mexico, little Cambodia, little purgatory
We, the West Bank & Gaza strip of Gringolandia
We, the unemployed & subemployed who work so pinche hard
so you don’t have to work that much
We, whose taxes send your CEOs & armies
on vacation to the South
We, evicted from your gardens & beaches
We, fingerprinted, imprisoned, under surveillance
We, within your system, without your mercy
We, without health or car insurance,
without bank accounts & credit cards,
We, scared shitless at ground level,
but only at ground level
like a pack of hungry wolves
exploring the ruins of an empty mall
we continue to be… together

3. To the lords of fear and intolerance

I say, we say:
We, mud people, snake people, tar people
We, bohemians walking on millennial thin ice
Our bodies pierced, tattooed, martyred, scarred
Our skin covered with hieroglyphs & flaming questions
We, the witches who transform trash into wearable art
We, Living Museum of Modern Oddities & Sacred Monsters
We, vatos cromados y chucas neo-barrocas
We, indomitable drag queens, transcendental putas
waiting for love and better conditions in the shade
We, bad boy & bad girls over 50
We, lusting for otherness
We, mota, peyote Ayahuasca & cocaine
We, todos somos putos y putonas
We, ‘subject matter’ of fringe documentaries
We, the Hollywood refuseniks,
the greaser bandits & holy outlaws
of advanced Capitalism
We, without guns, without Bibles
We, who never pray to the police or to the army
We, who never kissed the hand of a bishop or a curator
We, who barter and exchange favors & talismans
We, who still believe in community, another community,
a much stranger and wider community
We, community of illness, madness & dissent
community of horny angels & tender demons
We, scotch, mescal and bleeding saliva
We, frail and defiant; permanently outraged but always tender
We shape your desire while you contract our services
to postpone the real discussion
We are waiting, still waiting for you to go to sleep
so, we can continue the party

4. To the Lords of Censorship

I say, we say:
We, the artists & intellectuals who still don’t wish to comply
We, who talk back in rarefied symbols & metaphors
against the corruption of formalized religion & art
We, critical brain mass
spoken word profética, sintética
We, bastard children of two humongous nuns:
‘Heterodoxia’ e ‘Iconoclastia’
We, the urban monks who pray in tongues & rap in Esperanto
We, who put on masks, penachos & wigs to shout
‘you just can’t take my art away’
We, who dance against the rhythms of the times
We, who suddenly freeze!
[pause]
Standing still in our underwear
right in the center of the stage or the street
with the words carved on our chests:
‘Performance artist: will bleed for food’
‘Obsessive artist: will die for one idea’
We, critical brain mass
fuga inminente de cerebros y hormonas
spoken word profética, sintética
We continue to talk back… talk back… talk back…

5. To those who are as afraid of us as we are of them

I say, we say:
We, who have no name whatsoever in the news
We, edited out, pixelated, censored, evicted, postponed
We, beyond the video frame, behind the caution tape
We, tabloid subject matter par excellence
We, involuntary actors of ‘The Best of Cops’
eternally stalking mythical blonds in the parking lot,
We, mistaken identities in your computer memory
We, generic brown & black males who fit all
taxonomic descriptions
We, black & brown lives don’t matter
We, black & brown nude bodies in the morgue,
taxidermied bodies in the Museum of Mankind
We, prime targets of ethnic profiling & capital punishment
We, one strike & we’re out
We, prisoners of consciousness without a trial
We, of the turban, burka, sombrero, bandana, leather pants
We surround your neon architecture
While you call the Office of ‘Homeland Security’

Yes, we are equally scared of one another

6. To the share-holders of mono-culture

I say, we say:
We, Americans with foreign accents & purple tongues
We, bilingual, polylingual, cunnilingual,
We, los otros del mas allá
del otro lado de la línea y el puente
We, lingua poluta et disoluta,
rapeando border mystery; a broader history
We, mistranslated señorita, eternally mispronounced
We, lost and found in the translation
lost & found between the layers of my words
We, interracial lovers,
children of interracial lovers, ad infinitum
We, Americans in the largest sense of the term
(from the many other Americas)
We, from Patagonia to Alaska
From Sao Paolo to New York
in cahoots with the original Americans
who speak hundreds of beautiful languages
incomprehensible to you
We [Shamanic tongues]
We, in cahoots with dozens of millions of displaced
Latinos, Arabs, blacks & Asians
who live so far away from their land
We, trapped between ICE and organized crime

We all speak in unison therefore you cease to be
even if only for a moment
behind the curtain of language
I am, US, you sir, no ser
Nosotros seremos
Nosotros, we stand
not united
& when we talk back,
you become tongue-tied pendejos

yess! magister dixit:
the people you call ‘aliens’
are the original inhabitants of this continent

7. To the masters and apologists of war

I say, we say:
We, matriots not patriots
We, rebels, not mercenaries like you
We, labeled ‘extremists’ for merely disagreeing with you
We, caught in the crossfire,
between Christian fear & Muslim rage,
We, a thinking majority against unilateral stupidity
against preemptive strikes & premature ejaculation
We reject your arms sales & oil deals
We distrust your orange alert & your white privilege
We oppose the Patriot Act patrioticamente hablando
the largest surveillance system ever,
the biggest prison complex to date
We, whose opinions are never on the front page
of your morning paper
We, who are never polled by Fox News
who never get to debate those TV pundits
We did not vote for you,
do not support your wars,
do not believe in your violent gods
do not respect your immigration laws
Standing scared but firm
We demand your total, TOTAL withdrawal
from our minds and bodies ipso facto

And when we speak in tongues, you disappear

We, baaaad poetry, baaad art!
We, techno-pirates, Region 4
We, the shamans exorcising Enron
los brujos against Microsoft
poetas solitarios contra Wal-Mart
We, dervishes under the arches of McDonalds
radical clowns confronting the global police
immigrant teens torching the cars of the wealthy
We, los indignados y desterrados
El Movimiento Sin Tierra
Paracaidistas en Wall Street
the Other ‘99%’
We, the ghosts of the past
in cahoots with the future warriors
in cahoots with all innocent civilians killed
on both sides of the useless War on Terror
the useless War on Drugs
We, nosotros, going crazy to remain sane
literally dying for new ideas
performing against all odds
dancing on the edge of a crater
We, witnesses & willing victims of the End of Empire
We, Western World imploding disfunctionalia
history’s final chapter… colapso total!

We continue to talk back & make art

We, here we are, in (name of the city) mapeando,
mapping the immediate future
so you and I can walk on it
without falling inside the great faults of history.
You & I,
verbally walking together;
you & I,
ephemeral community;
you & I,
a tiny little nation-state;
you & I,
a one-hour-long utopia
titled ‘You & I,’
alone on stage,
fighting together the World Bank,
the IMF, the WTO & the G-8 cartels;
fighting avant-garde desire & the Patriot Act;
tu y yo, juntitos, bien abrazados,
fucking suavecito
fighting isolation & isolationism….
And art is our battlefield,
que otra?

And if we fall
we are caught in mid-air by a total stranger. 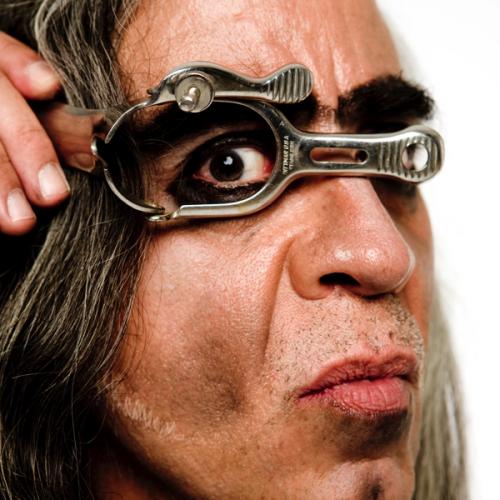 Guillermo Gómez-Peña is a performance artist, writer, activist, radical pedagogue and director of the performance troupe La Pocha Nostra. Born in Mexico City, he moved to the US in 1978. His performance work and 11 books have contributed to the debates on cultural & gender diversity, border culture and US-Mexico relations. His art work has been presented at over nine hundred venues across the US, Canada, Latin America, Europe, Russia, South Africa and Australia. A MacArthur Fellow, Bessie and American Book Award winner, he is a regular contributor for newspapers and magazines in the US, Mexico, and Europe and a contributing editor to The Drama Review (NYU-MIT). Gómez-Peña is a Senior Fellow in the Hemispheric Institute of Performance and Politics, a Patron for the London-based Live Art Development Agency and in 2012 he was named Samuel Hoi Fellow by USA Artists