Political satirist Will Durst reported in a local San Francisco newspaper that he was having a drink in a North Beach bar, and he commented sadly to the female bartender that he was afraid that with the November 8th election the bad guys had won and they had all the guns. The woman bartender replied, “But we have all the lesbians.” That was just the laugh I needed and the reminder of how much lesbians have to give.

There are so many reasons to be despondent after what I’ve come to call the Zombie Apocalypse. And the ascent of Trump to the White House is just the beginning as he starts to name more rich white men to offices of agencies they will probably want to dismantle. It’s like he’s hiring the fox to guard the chicken coop.

The day after the election I was in such shock I couldn’t get out of bed. I am fairly certain women’s and lesbians’ rights will be trampled from all directions; along with the rights of just about everybody else who stands in the way of the white (mostly), male (mostly) careerist, capitalist egos. Or at least he and his cronies will try.

But it’s crucial we not forget we’ve been here before. This is just so much more open and arrogant it feels like a slap in our faces. But we’ve been slapped before. You may not remember (but I do) that people thought if lesbians ate more green vegetables we’d be cured. Or that electric shock treatment would put us back on the ‘straight’ and narrow!

Sure, some enlightenment would occur and we’d get our hopes up. Remember ‘lesbian chic?’ I think it lasted about ten seconds and I still don’t know what it was—a photo of k.d. lang (one of the great voices of our generation) being fake shaved in a barber chair by a famous model on the cover of a fashion magazine?

Years ago I used to love a Canadian show, “Exes and Ohs,” because it got a lot closer to a portrayal of a working class lesbian life I recognized: butches that would make the mainstream nervous. Today, as far as I can tell, orange is not the new black—all lesbians do not live in prison where they are contained so aren’t a threat.

We do hunger for more media representation than simply middle-aged women on the hunt for sperm or fashion lesbians for whom sexual orientation is an afterthought. But in these highly untrustworthy media times, it’s time to stop measuring lesbian success by how much media representation we have.  Women are not that interesting to men unless we’re silent, sweeping or laying down. And lesbians are a walking threat to male hegemony, so we shouldn’t get too focused on how many ‘lesbian’ TV shows or movies there are. What we could focus on is actual lesbians and our culture.

With the recent election we can really count on there being even less representation of who we are as well as cuts to programs that support women, queer people in general and lesbians specifically. The first thing my spouse, Diane, and I did the day after the election was review our donations to charities.  Because it was the end of the year all the nonprofits are doing extra outreach.  We didn’t have to think twice: National Center for Lesbian Rights, the NAACP and Planned Parenthood shot to the top of our list. These are the organizations that are doing the work to hold on to our human rights and if I can’t be out there chaining myself to the White House fence (as anti-war protesters did in the 1970s) then I best support those who do—metaphorically speaking.

Back in the day simply going to a dyke bar was dicey; you could be arrested or beat up by thugs who hung around outside waiting for lesbians to go home. But inside, even when the bouncer was a big, straight guy protecting the interests of organized crime, we knew how to have a good time. We drank too much in an effort to deaden the knowledge of the hateful world that waited outside. We had sex in tiny bar bathrooms because we didn’t have anywhere else to go. We took too many lovers trying to keep love from being snatched away from us. But what we also did was manage to give each other a sense of personhood, community and power.

People (even some contemporary lesbians) like to make fun of lesbian potluck dinners or how lesbians never truly break up but keep our ex-lovers in our lives.  What they’re mocking is our special power: the ability to make family. We bond with each other and don’t let go. That’s how we created independent lesbian publishers and magazines; that’s how we nurtured lesbian writers and other artists who’ve survived and thrived over the past 40 years; that’s how we elected lesbians to public office; that’s how Ellen had the courage to finally come out.

Now that the Zombie Apocalypse is upon us we need to go grassroots. About 15 years ago my spouse and her friend Andrea decided to bring lesbians together around the idea of philanthropy. They created an ad hoc group, One Hundred Lesbians and our Friends, which met over food (potluck) once a month and invited lesbians who were doing projects to come and talk about them. From an opera about Aileen Wuornos to queer women of color media workshops to a women’s shelter there was no shortage of work being done by lesbians that had a hard time finding financial support.

Women are generally poorly trained around finances (“Why bother won’t your husband take care of that?”) and often carry a lot of shame about their ‘fiscal inadequacies.’ So the group wanted to not just raise money but re-educate lesbians who often acted as if we didn’t have enough money to support causes or didn’t know how to give strategically. We ate and wrote checks; then we went around the room and said aloud what we’d each decided to give. There was no shame only celebration as we came to believe that our donation gained strength from the donations around us. Five dollars would become five hundred dollars at the end of the day. In two years we raised more than two hundred thousand dollars for Bay Area lesbian projects.

It was a small effort that travelled around to women’s living rooms and built upon the relationships that lesbians are so good at creating. The power of those relationships is one reason I'm going to the Women’s March on Washington. I do want women around the world to see that we are not sitting around waiting to be eaten by the zombies. The other reason is to just be near a big group of women and feel our energy buoying us up.

Then when we come back we’ll give dinner parties/potlucks. Tweeting is fun; Facebook and Instagram too. But nothing creates revolutionary energy like looking each other in the eye and hearing your sisters' impassioned voices or delicious laughter. If we can bring together three or six or ten lesbians every month or so to talk about some organization we think needs help to chip away at this disaster we can make donations or recruit volunteers that will make a difference. If we can bring lesbians together to eat, laugh and enlighten we will have sown the seeds of revolution just as we did at those old potlucks.

I know things are different for you now. No more seedy bars or sneaking around (if you are privileged enough to live in one of the bubbles). Dykes are more out and able to move up the ladder closer to the top of things than ever before. But one thing we’ve learned is that every time one group of citizens (straight white men and the women who love them; workers who have been betrayed by American manufacturing) feels more insecure it tries to pin blame on another group (blacks, gays, immigrants). It tries to take back our rights in the mistaken belief that will solve their problems. Conservatives (which is a mild word in light of the fascist behavior we’ve seen during the election campaign and now during the transition of power) want women in general to return to kitchens and be quiet about rape and job equity. They want lesbians to return to mental institutions or be cured. They want to limit the voting access of African Americans and other marginalized people who tend to be more progressive.

So it’s time we look back to the lesbian culture that nurtured and radicalized us to raise our consciousness again. We’ll find the strength in numbers as we used to do and reinforce circles of friendship that can be effective on a local level by strategically supporting progressive projects, institutions and political campaigns.  Those circles also support us personally rather than just virtually. A hand on my arm when I feel myself sinking into post-election despondency is worth so much more than a hashtag or link to an article. Lesbians are the link, to each other and to the future.

I know the ascendency of an autocrat to the presidency feels like an insurmountable setback, but we're dykes, we'd never let down a bartender who has faith in our ability to change the world. To quote one of my favourite signs from the early marches: ‘An army of lovers cannot fail!” 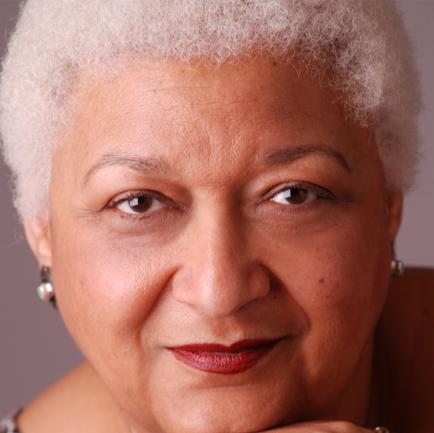 Jewelle Gomez is the author eight books including the cult classic, Black, lesbian vampire novel, THE GILDA STORIES, whose 25 th anniversary edition was published by City Lights Books. Her adaptation of the novel for the stage, BONES AND ASH, was performed by Urban Bush Women Company in 13 US cities. She is also the author of WAITING FOR GIOVANNI a play about James Baldwin. Her new play about singer/songwriter Alberta Hunter, called LEAVING THE BLUES, premiers at New Conservatory Theatre Center in spring 2017.