We have a sincere task: speak a creative truth when the truth is creatively abused in unprecedented ways by our country’s unpresidential head of state. When the president stood atop the Capitol steps on Inauguration Day, it was clear that these are not the times to look up for inspiration.

I’m an artist. I don’t look up, I look around, and I question everything …

Can we imagine a citizenship culture based on mutual recognition, mutual respect, and dignity?

How do we weaponize love?

I ask these questions in a particular context. I am a theater maker and educator who makes opera, museum installations, and dance theater. I concurrently serve as a senior leader at Yerba Buena Center for the Arts in San Francisco. I occupy a dual perch of administrative direction and a privileged artistic visibility.

So what should one do in these times if armed with the privilege to dream and 40 acres or so of cultural space to plow? We are creative citizens. What to sow?

To begin, I must insist that the seeds of Trump-era artistic expression should be grounded in dreaming forward rather than reconciling our present cultural rifts. People tell me to be resist “preaching to the choir” in this moment, or they wonder about the efficacy of cultural work that doesn’t invite participation by multiple sides of the ideological spectrum. My problem with this assumption is the implication that art can heal only if our creative voices are willing to tune themselves to the frequency of a common ground. I prefer to take my cues from a history that teaches us that the icons of dissent weren’t marked with holidays in the times of their protests. Most often, the “right thing” isn’t clear to us until a generation after the blood has dried.

America has elected rotten behavior as its moral compass. The intellectual-in-chief can only manage policy at haiku length, which he stutters at the world from a gold tower, 140 characters at a time. His ascendancy marks the defense of white supremacy in a moment of radical demographic shift and a corporate victory over science in a climactic age of climate change.

Respectfully, my art is not a bridge to this. It is a socket, inviting all who wish to be charged to plug in. The arts are not a bridge, they are a battery.

As always, artists are mandated to draft the physical choreography of critique. If a shift from failed state to autocratic regime is imminent, then our brightest hope is among the creative souls who can harness and develop the language of the public imagination. Our precarious state is illuminated by the light of the Ghost Ship and muted by the wattage of orange-hued white noise.

If the role of artists is to illuminate culture’s unseen possibilities, then arts institutions must investigate how best to activate those possibilities. For example, if we liquidated all the assets at the Met, sold everything in the building in a high-art garage sale, we'd probably be sitting on 500 billion dollars. Could we imagine taking that 12-figure windfall and investing it in the cultural landscape of this country? Could we imagine 500 billion dollars allocated to ensuring inspiration for everyone in the country for the next generation? What would we lose if the Met disappeared and in its stead we created an ACLU for the arts — a privately held organization in service of American inspiration?

To be clear, I love the Met and its kindred institutions. My provocation emanates from the unfortunate truth that the arts are culturally positioned as distraction rather than catalyst, which is why no one ever expects us to lead.  How do we expect cultural institutions to move into leadership if we're not willing to center inspiration in our cultural discourse? It behooves us to think of arts institutions with greater intentionality, to consider them not as repositories of prefabricated culture but as the living infrastructure necessary to mobilize the public imagination.

As a cultural community, we do not have the luxury of constructing hermetically sealed art spaces full of objects we love that don’t reach out to touch us back. I believe that art isn’t other; it is of us and must be integrated into the cycle of social progress in a systematic way. For instance, YBCA has created a fellowship program that brings artists and nonartists together for a year in pursuit of a critical social inquiry. It is part of a broader mission to generate culture that moves people, to turn our glass and steel architecture into a social incubator for creative change. Our adversaries have designed systems that effectively incarcerate and deport us. If central government actively propagates the politics of exclusion, can arts institutions endeavor to choreograph social justice?

Friends, I ask you to join us today in holding fast to a rigorous curatorial standard while wondering aloud, “Can we design freedom?”

In solidarity and towards an inspired body politic, 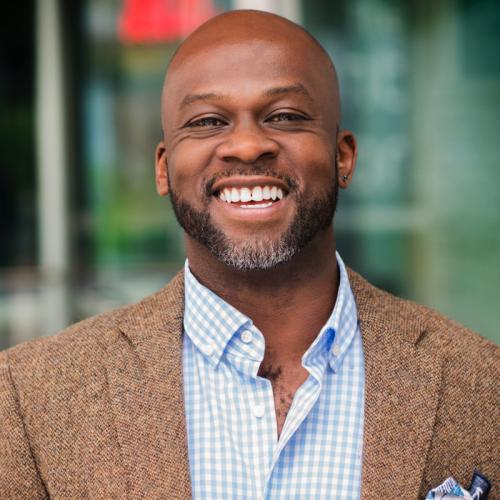 Marc Bamuthi Joseph is an inaugural recipient of the Guggenheim Social Practice initiative, and the United States Artists Rockefeller Fellowship. He is also the winner of the 2011 Herb Alpert Award in Theatre, and an inaugural recipient of the Doris Duke Performing Artist Award. Joseph is currently completing a new libretto with Bill T. Jones for the Opera Philadelphia while serving as Chief of Program and Pedagogy at Yerba Buena Center for the Arts. His latest evening length work, /peh-LO-tah/, was commissioned by the Kennedy Center for the Performing Arts, and premiered at the YBCA in November 2016.