I know it’s been awhile since we’ve spoken. Though you place that “decision” on my shoulders, I can say from my perspective, you weren’t ever really listening. Only once, after a performance, I saw how your eyes lit up. I knew you were really present and proud of me. In that moment, I felt a great togetherness. I also felt this sense of togetherness when you’d pick me up in your black car and it felt like you and me on our adventure, our journey. For awhile after we broke up, I would look for your car and expect to see you at every turn.

As I tell my students, and push them to see in our Communication class, behind all the silence and lack of listening is fear. You don’t see it that way, but I do. It’s in the culture now, after Trump’s election, that barbaric fear. I also know that what ultimately destroyed our relationship is fear, fear of intimacy without proper tools to address it. I can hear Audre Lorde here speaking now, “We were two black women touching our flame and we left our dead behind us.”

During the late ‘80s and early ‘90s, what I remember more than anything in the eyes of my brothers who were dying of AIDS is fear, fear that lurked around hospital beds, fear that stalked and awaited its prey. I feel that that’s what our President-elect succeeded at, stoking and mobilizing our fear. I don’t believe that what is happening in this country now is just about racism and misogyny, though of course that’s there. More than anything he preyed upon our fear. It’s been a reality show; he picked a dormant issue and provoked it. It was done in Nazi Germany. It was done in Rwanda. One group pitted against another. Without any real language instead of arguments, intellect, and complex characters or situations, he gave us buzzwords and takeaways—BAD, EVIL, NASTY, WRONG.

Around the time that you and I broke up and stopped speaking, the massacre at a gay bar in Orlando, Florida happened; a homophobic young man burst into a bar and shot young gay people who were dancing. I wondered if you were afraid, if you had somewhere to turn, if anyone was holding you. It didn’t escape me that I once worked in bars and clubs—for years—and it could have been me or anyone I have ever known in that club. Around the time that this happened, another black man had been murdered by police, so many now I've lost count. I was in Chicago performing, and I just knew I had to do something in my work and words to pull all the alarms, because America, then and now, ever-increasingly, is in a state of emergency.

Around the time that all this happened, I wanted to go to you and say, “It’s time for us to lay down our weapons, now more than ever; we need to be each other’s family.” I wanted to say to everyone I had ever loved, and as Dorothy Allison might say, “‘Every woman I have ever warred with,’ we need to lay down our weapons, rise above the grudges, the anger, the fear, the petty stories we hold onto that have nothing to do with the reality of who another person is, and be family for each other.”

We are getting older now. It’s always stayed with me, the story that the New York Times ran on gay and lesbian seniors who have been abandoned and are lonely. We need to be each other’s family.

Recently, I was looking at some of my students’ papers. I asked them to read Nicole Dennis-Benn’s novel Here Comes The Sun. Something stood out to me in a student paper, when they quoted from the novel. It reminded me of Zora Neale Hurston. A character says, “Membah dis, nobody love a black girl. Not even harself.” I promise to do better. For me, that means daily checklists about eating well, exercise, painting my nails, how much art I've made or taken in, reading I’ve done, being present for myself and others, doing things that nurture my soul.

I want to end this letter the way the Audre Lorde would sign a difficult letter. I’m referencing one she once wrote to feminist Mary Daly, where she confronted her about biases and exclusion of black women in the telling of herstory and myth.

With love from me, and as Audre said, “…in the hands of Afrekete…”

We need to be each other’s family. 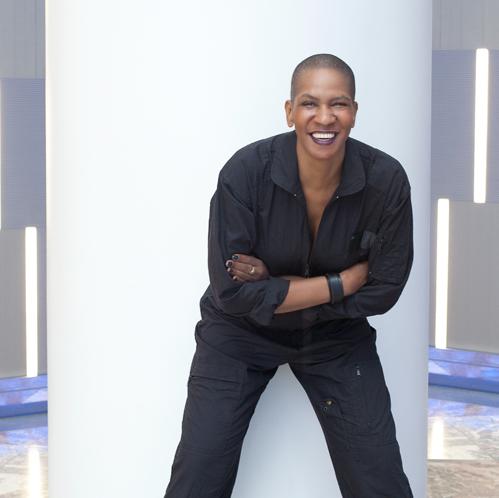 Pamela Sneed is a New York based poet, writer and actress. She has been featured in the New York Times Magazine, The New Yorker, Time Out, Bomb, VIBE, and on the cover of New York Magazine. In 2015, she appeared in Art Forum, Black Book and The Huffington Post. She hosted Queer Art Film at the IFC in New York City. She is author of Imagine Being More Afraid of Freedom Than Slavery, published by Henry Holt in April 1998, KONG & other works, published by Vintage Entity Press (2009) and a chapbook Lincoln (2014). In 2015, she published the ChapletGift with Belladonna. She has performed for sold out houses at Lincoln Center, P.S. 122, Ex-Teresa in Mexico City, The ICA London, The CCA in Glasgow Scotland, The Green Room in Manchester England, BAM Cafe, Joes Pub, The Public Theater, Central Park Summer Stage, Bronx Summer Stage and recently Columbia University’s Tribute to James Baldwin, The Whitney Museum and BRIC. She appears in Nikki Giovanni’s, The One Hundred Best African American Poems. She has taught at Sarah Lawrence as a guest faculty member and is an online Professor at Chicago’s School of the Art Institute teaching the courses Human Rights and Writing Art. She was a mentor/consultant for the Poet-Linc program at Lincoln Center and directed a final show at Lincoln Center Atrium in 2016. She has recently presented at a symposium at NYU on Humor, Politics and the AIDS crisis. In summer 2016, she has received a residency at Denniston Hill and is an SAIC Visiting Artist in the MFA low residency program. She is completing a collection of short stories "Anna Mae/For Me, Tina Turner and All Black Women Survivors," and has a forthcoming chapbook Sweet Dreams with Belladonna, February 2017.