When I was in college, I had a friend, a brother, who became a policeman. He was a big Panamanian kid who could run and tackle, and he made himself into a super-cop narc pretty quick. He called other brothers ‘Beloved.’ Isn’t that amazing? He laughed with his whole face in those days. He knew pretty quick too that there were white cops in his precinct trying to set him up, hoping he’d get killed.

I don’t know how D laughs now, or if he does. This was 1992. In those days, Trump was the fucker who tried to move the public to kill five boys a lot of us knew immediately were innocent. Today, he is your president, Brother. And so, your name must be Beloved. Every day there must be no chance of your dying unloved, so pick sage or rosemary and keep it in your pocket and smell it on the subway, or light it on Halsted, or burn it in Times Square. You know damn well you’re not surprised at anything that’s happened. It was 1989 when that man said they should be executed, and Yusuf Hawkins was recently buried, and police assassinated a man on the corner of Church and Nostrand in broad daylight, and we were so many years from cellphone cameras. Now your neighbors are besieged by the children of those who ran from the city when your face showed up, and called for the death penalty, and so you are not shocked at all by the vote. Every day, know that your name is Beloved.

The American body politic though, has not been colonized. Trump has always been its purpose, since Reconstruction and Jim Crow and vagabond laws. Tie a cotton gin fan around a boy’s neck and drown him in a river or shoot him to death in a Walmart; same American body politic. This is ours. It was not taken from us. Obama took it from America to give it to the people by sleight of hand when he wasn’t doing its bidding himself. America has simply taken it back.

We have work to do. We have never stopped having work to do. Nothing has changed. Laugh. Make love. Kiss your babies. Your heart cannot be colonized. Resist any narrative that says you had anything to do with this; that if you or your people had done something different, we’d be ushering in a different day. What different day? What neo-liberal, prison-for-profit, public-school-closing day are we talking about? Siege is what we’ve known, Brother, so I see you, and I call you Beloved. You already know what it is, how you don’t sit with your back to doors, how you don’t fuck with police, how you remove your hoodie before you order your wings fried hard and French fries, what a storefront grating feels like against your cheek, what your hands high on the steering wheel feel like. Colonize has always been with us. Ain’t. Shit. Changed. Do your work. Do your work. Do your work.

This is America. Nothing has changed. We make a dollar out of fifteen cents. Love is still our best weapon – struggle, our most complete selves. No president in the history of America has ever done anything for the people without the people taking to the streets first. Not a single one. Not Lincoln, not Roosevelt with his New Deal. Not Kennedy. Not Johnson. None until Obama attempted to give us health care. So America, the real one, the white one, the one that signed the declarations, the 3/5ths of a man America, the abolition of slavery, except as punishment for a crime, most prisons on the planet America, the Mike Brown was the aggressor with his hands in the air America. What made you think the America of Alton Sterling and Philando Castile and Rekia Boyd and Eleanor Bumpurs wasn’t this America? Your President-elect is new and not new. He is the latest in a long line.

My daughter is three. She already knows. Papa those are police lights. We don’t want to be around them, right? We don’t want to talk to police, right? Correct, I tell her. I’m a father now and if I want to call my daughter Beloved for a long time, I must teach her what I learned long before this election showed us this nation’s more brazen face. Keep your children – all of them, the ones you’ve sired and the ones in the street for whom you’re responsible – close. Tell them they are beloved too, and that the land is theirs. The land is theirs no matter how many snarling, spitting faces say otherwise, no matter who tells you to go home, no matter where their fathers were born or what languages they speak, or what languages you speak, Beloved. A long line of people have already worked to make this land yours, to face East and press your forehead to the ground and speak to God on its behalf. Allah, Jehovah and the orishas walk with you, fam. Believe that.

A month after D became a cop, he told me – put on the house light in your car when you get pulled over, Beloved. They can see you. They might have an idea there’s a cop in your family. He came to bring me the news that’ll keep me alive. He called them ‘they.’ He called me ‘Beloved.’ It ain’t never been nothing but what it is, fam. We’re all angry, and tired. We’re not shocked. Burn sage, Brother. Keep the house light on. Live. 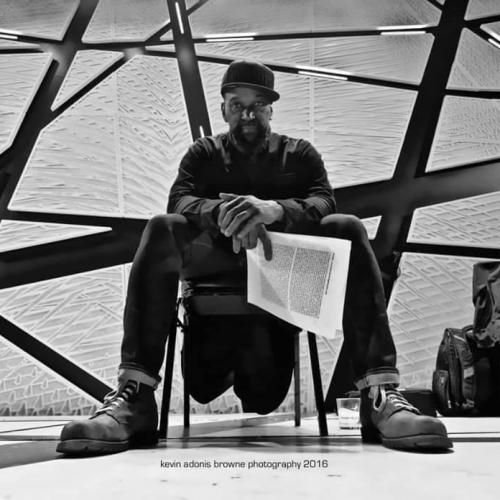 Roger Bonair-Agard is a native of Trinidad &amp; Tobago, Brooklyn, and author of tarnish &amp; masquerade, (Cypher Books, 2006), GULLY (Cypher Books, 2010), Bury My Clothes (Haymarket Books, 2013), which was long listed for the National Book Award, and Where Brooklyn At?! (2016 from Willow Books/Aquarius Press). Roger is Writer-in- Residence at Brooklyn’s National Sawdust, co-founder of NYC’s LouderARTS Project, and frontman for the band Miyamoto is Black Enough. Founding member of NYC’s Vision Into Art, and creator and facilitator of The Baldwin Protocols: Reading Series, he is Program Director with Free Write Arts &amp; Literacy at Cook County Juvenile Temporary Detention Center.