For many of you, this is a moment of cheering the candidate you voted for, and for many it is a moment of disquiet, somber reflection on the days that lie ahead. I fall in the latter group. This dis-ease emanates not from a political loss, but from the wanton vandalism with which some of our fellow Americans are acting out their fear and anxiety. There are genuine fears of economic uncertainty and national security. Most of us across the political spectrum share these. But then there are anxieties targeting the shades of our skin, the accents of our tongue, the variations of our headcoverings, the hair follicles on our faces, biology of our genders, the gods we believe in or don’t, and the histories of our ancestors. The list goes on and on.

Perhaps for the first time in our modern history, fear has found a way to target Americans of so many hues and stripes at the same time. Women, Jews, Hispanics, LGBTQ, Muslims, Blacks, Asians, Sikhs all stand united as its targets. And there are even voices expressing fear white people have of losing their heritage.

Fear appears to the winner in this election cycle more than any candidate or platform.

I know fear quite well. I have lived with it all my life. It has been a constant neighbor of mine. On many occasions it has turned its ire on me. Fear has a way of creating a home erected on the pillars of vulnerability.

Vulnerability is something we are told to run away from, to hide in layers of denial, to patch it up with quick solutions.

I encountered it for the first time on Oct 31, 1984 as a young boy with my family in India. Following the assassination of the Prime Minister of India by her two Sikh bodyguards, fear went on a vengeful rampage. For the next four days, thousands of Sikh men were hunted down for their turbans and beards. They were roasted alive, gasoline poured over them and lit on fire. This carnage took place in cities across India. My family survived a close shave with death.

As we felt emotionally naked in our vulnerability, my parents seriously considered moving to their native state of Punjab up north. Somehow over the course of weeks and months we found a way to move on and get busy with our lives. My family wanted justice but just did not want to work toward getting it. Living life, raising kids and planning for our future kept my parents motivated to move past this vulnerability.

The next time I met vulnerability was all by myself, having moved back to the land of my birth after high school. As a teenage boy with sprouting beard and turban, I found myself greeted by chants of “genie,” “clown,” and “raghead” on the streets of Los Angeles. Some laughed in my face. Two years into college I longed for a way to become invisible to stares from fellow Americans. I took off my turban and cut my long unshorn hair. The eyes were off me for a while.

In the days following attacks of 9/11, “Osama,” “Taliban,” “terrorist,” “raghead,” and “desert nigger” were hurled my way, and have been to this day because I sport a turban and beard as part of my renewed commitment to the Sikh faith.

Weeks after the tragedy, I found a way to channel the frustrations in the pit of my being by creating cartoons full of turbans and beards. I have been doing that since, tackling life’s contradictions and turning them into cartoons sprinkled profusely with humor and sarcasm. A few years ago one of these cartoons, Captain America in a turban and beard fighting hate came to life with me sporting the Captain’s uniform. It was not my idea. A photographer made this request and I initially said an emphatic “no.” I had my own body image issues as a skinny man who already has enough eyes on him in public appearing to be the outsider.

It took almost a year for me to be convinced to get out of my own way. It was after another tragedy: a white supremacist massacred six worshippers at a Sikh gurudwara (temple) in Milwaukee on a Sunday morning in August 2012, opening the doors to vulnerability. I reluctantly embraced this incarnation of vulnerability and agreed to don the uniform to face off with the ghosts of stereotypes.

Captain America does not exist. Not physically at least, but in the universe of our imagination he is as real as our personal existence. And that is precisely why I have been able to connect with Americans from all walks of life dressed as Captain America donning my turban and beard, armed with the shield. At times confusing many, even those who support the new president. This confusion is what I relish. These are tiny rips in our imagination where vulnerabilities about our perceived differences stand exposed, carving space for an honest connection.

I am an introvert, a nerdy kid who grew up to be man defined initially by many of the labels we allow the world to place upon us. Some of these have had tragic consequences. I have been battling since to break down these labels. I am not courageous, although some have used this word to describe me.

The tragedies of life, the moments that leave us most vulnerable, create possibilities for us to go out on a limb and express seeds of courage we all possess.

Today the fear, the vulnerability many of us feel, is not something to run away from, it is not something that has a quick solution. We need to meditate on this vulnerability. Let it marinate in our being. Don’t let the angry or even hateful fumes coming out of this experience consume you. These are moments that can lead us to cower into inaction, to conclude our impotence for change, to look for an outside source to lead us. But these are also moments that can lead us to get out of our own way, to take small steps towards change and justice. Systemic changes and revolutions are not some instant magical seizures but small courageous acts by countless people that build up into a conflagration.

Now more than ever, we need to practice the art of love, not the amorous kind but the kind that comes straight from the heart. This love has to enable us to reach out to those Muslim women who are contemplating taking off their hijabs, Sikh boys taking off their turbans, immigrant families considering a move to safer confines, women struggling with seeds of life hanging in the balance, trans people trying to find an equal footing in our world.

Even more importantly, this love has to enable us to connect with those consumed by projecting out their fears and hate. We have to pour our love on those engaging in hateful rhetoric and deeds.

In the months and years ahead, a battle of words for truth and change will be fought in all kinds of settings with all kinds of munitions. As I get ready, I am spending time with the following companions:

The Pity of It All: A History of the Jews in Germany, 1743-1933 by Amos Elon
King: A Comics Biography by Ho Che Anderson
The Next American Revolution: Sustainable Activism for the Twenty-First Century by Grace Lee Boggs
Harriet Tubman: The Road to Freedom by Catherine Clinton
Annihilation of Caste: The Annotated Critical Edition by B. R. Ambedkar

I leave you with words of love from one of the most soulful poets from 14th Century Persia, Khwāja Shams-ud-Dīn Muḥammad Ḥāfeẓ-e Shīrāz

It Felt Love
How
Did the rose
Ever open its heart
And give this world
All its
Beauty?
It felt the encouragement of light
Against its
Being,
Otherwise,
We all remain
Too
Frightened

With Love and in Solidarity.
Vishavjit Singh 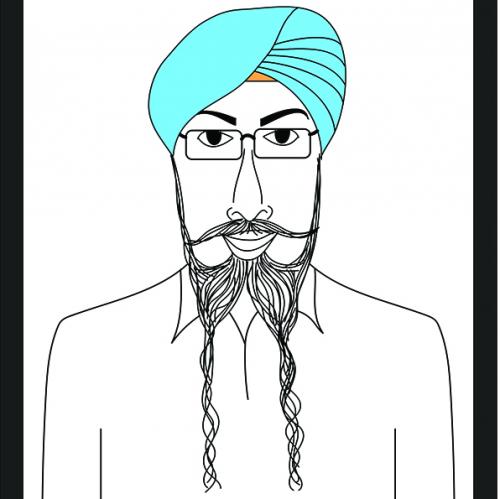 Vishavjit Singh is a cartoonist, writer, performance artist and creator of Sikhtoons.com. He is currently a Media Fellow at Saldef (Sikh American Legal Defense & Education Fund). He got his spark for cartooning in the post 9/11 tragedy when Americans with turbaned and bearded countenance became targets of hate/bias crimes. He travels around the country hosting talks, storytelling sessions and cartoon workshops. His work and message has been covered by diverse outlets including NY Times, NPR, The Guardian, BBC, The Atlantic Monthly, Huffington Post, Salon and The Teaching Tolerance magazine.